Streets Ahead - Interview with Janette Sadik-khan 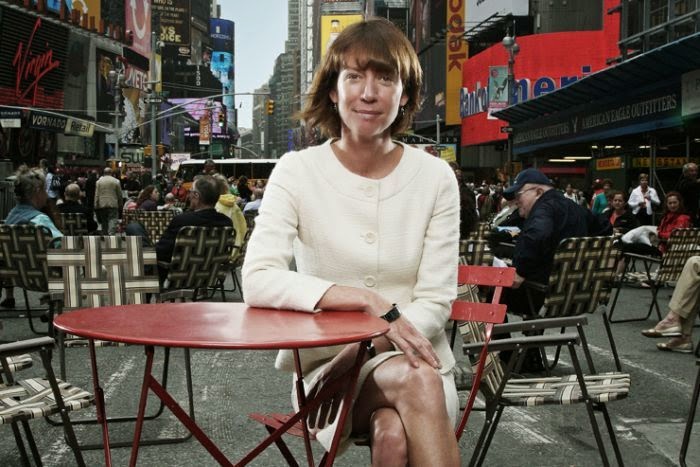 Janette Sadik-khan turned the mean Streets of New York into a model city for Cyclists. Bike SA has a chat to the transport guru.

It is no exaggeration to say that Janette Sadik-Khan transformed the streets of New York. The department of transportation commissioner for the city under former mayor Michael Bloomberg, used innovative urban design approaches to turn a once car-choked and dangerous city into a leading model for mobility, safety and sustainability.

Sadik-Khan made it easier to walk, bus and cycle through her city. Projects she introduced include America’s largest bike-share program, the addition of almost 600km of bicycle lanes and the publication of a how-to book that lets other cities in on the secret to transforming streets for the better.

Bike SA: Adelaide retailers are complaining loudly about a trial 40km/h vehicle zone, saying it’s sending drivers into other streets and costing them money. Retailers are also saying that bike lanes rob them of parking spaces. Based on your experience in New York, do you believe that Adelaide’s retailers will lose money due to cycle-friendly changes to our streets?

Janette Sadik-Khan: New York took a close look at streets where major projects were implemented and found that streets with bike lanes, bus lanes and plazas weren’t just safer, they outperformed other parts of the city economically.

Retail sales increased by 49 per cent on Ninth Avenue, where we installed the first protected bike path. This real-world, data-driven experience took us from anecdote to analysis.

There has been a lot of international research that shows that pedestrians spend more money than motorists. Our research found that retailers tended to overestimate the percentage of their sales that comes from people who drive to their business as opposed to walking or transit.

Still, our parking-protected bike paths retained parking and in many cases we were able to provide additional parking on side streets and tailor parking zones so that businesses could get deliveries at specific times during the day.
It’s really not a zero-sum game. You can balance a street so that it works better for everybody who uses it. The key is in trying designs and tailoring them to meet all the demands put on them, not just any one demand.

It’s noticeable that entrepreneurial store owners – cafe owners, small bars, galleries and of course bike shops – have welcomed a bike-friendly city. What’s your take on that – does a certain type of
retailer prosper in such a city? Are there losers in a bike-friendly city?

I think a variety of businesses recognize their value. You saw major retailers move into Times Square after we made Broadway a pedestrian zone in 2009. Retail rents tripled and it ranked on [global real estate brokers] Cushman & Wakefield’s list of top 10 retail destinations on the planet for the very first time.

Cafes and bike stores quickly recognized the value and requested kerbside seating or bike parking, but even legacy retailers like Macy’s and some of the city’s largest merchant groups not only supported pedestrian-friendly projects, they are our partners in helping maintain the projects once they’re installed.


We also partnered with companies such as Citigroup, which sponsored the bike-share program with $41 million. It’s becoming axiomatic that better streets mean better business.

Could I ask you about your own cycling habits: do you cycle to work? Do the streets of New York City scare you as a cyclist?

Biking is one of the greatest ways to get around New York City. I try to ride whenever I can, whether it’s commuting to work or for fun, or just to get to places that aren’t served by transit. I’ve been able to bike even more since [cycle-hire scheme] Citi Bike launched last year, getting to meetings or across town.

Riding along the Hudson River Greenway has to be one of the great bike rides in the world. And riding along the street you can see how dramatically the profile of a bike rider has changed. Even a generation ago, a biker in New York was likely to be a Lycra-wearing, ninja bike messenger. Today, you see old and young, men and women, entire families riding bikes.

That’s not only a sign of how far the streets have come in terms of feeling safe, more people riding also has a self-reinforcing effect, helping calm traffic, which in turn invites more people to ride.

In 1987, Mayor Ed Koch banned bicycles from midtown Manhattan – so there’s obviously a demographic in the city that backed Koch’s anti-bike stance. How did you win over those who saw no place for bicycles on New York’s busiest streets?

Just to clarify the record – the ban never actually took effect. And a lot of people say that that experience galvanized the bike movement in New York.
Before his death, former mayor Koch eventually supported our efforts to expand the bike network because it was part of a larger, coordinated build-out.

Under the visionary leadership of mayor Michael Bloomberg, we built North America’s first parking-protected bike lanes on some of New York City’s busiest avenues and new lanes right through the heart of midtown. Not only were we able to maintain traffic, local businesses thrived and injuries were reduced by 50 per cent, not just for bike riders but for pedestrians and motorists as well.

Changes to a street is one of the most sensitive decisions a city can make, so I understand that people feel passionately about them – and we heard from them in New York.

These kinds of designs had never really been tried on our streets, so it was only after we built them that some people could really understand and experience them. By the time we left office, poll after poll showed that people like plazas, bike lanes and bike share, by two-to-one margins.

And there’s the safety angle – guys like TV and radio host Glenn Beck or Toronto mayor Rob Ford say the best thing you can do for safety is get cyclists off the street. They say bike lane or not, cycling isn’t safe. Your thoughts?

The safest thing you can do for everyone is design your streets for the most vulnerable who use them. And if a street isn’t safe for bike riders, it probably isn’t safe for pedestrians either – particularly seniors and children.

We built almost 400 miles (650km) of bike lanes in six years, and even as millions of people rode Citi Bikes last year we saw the fewest bike riders killed in traffic crashes in 30 years, and it’s been almost five years since a pedestrian was struck and killed by a cyclist in New York City.

Considering how many more people are riding bikes, the risk of serious injury has dropped a stunning 75 per cent over the past decade alone.

More people walking and riding bikes has made our streets safer. So if you want to make a street safer for everyone who uses it, you can start by building a bike lane.

You faced a hostile press as you rolled out the city’s bike lanes. The New York Post ran with “Bike Lanes, Bike Lies - the Department of Transportation is Lying Through its Teeth about an Alleged Biker Boom” – how do you counter headlines like that?

Some headlines claimed that no one was cycling, while others claimed that so many people were biking that they were endangering pedestrians. After more than 8 million rides on Citi Bikes in less than one year – and that’s only about a fifth of all bike trips in the core of the city – you don’t hear those kinds of arguments much anymore.

I think it came down to experience instead of anecdote or abstraction. People saw how bikes fit into the street as the doomsday scenarios of why these changes could never work never materialized. New Yorkers experienced these changes firsthand and they clearly read between the headlines and voted with their feet, seats and pedals.

Today, we have requests from communities all around the city for more plazas, bike lanes and lower speed limits
– instead of these ideas originating with traffic planners, so we really turned the process on its head and are trying to keep up with the demand.

Did you see a biker boom?

In just a few short years New York has gone from bike-at-your-own-risk to one of the world’s great biking cities. Biking has quadrupled over the past decade alone and bikes are now as much a part of the New York City streetscape as yellow cabs.

Biking isn’t merely somebody’s political agenda, it’s not just a nice, green or healthy thing to do. It’s a basic, practical mode of urban transportation. It’s no wonder that 100,000 New Yorkers bought annual memberships for Citi Bike and more than 70 bike retailers opened up across the city.

A lot of cities want safer streets, but don’t know how to make it happen. What role can your book, the Urban Street Design Guide, play?

The Urban Street Design Guide, published by the National Association of City Transportation Officials, is an incredible resource for city planners in designing the next generation of urban streets.

Streets have been built almost the same way for more than half a century and there really has been no design guidance to tell planners about accepted new street treatments that have been tried, tested and proven.

This is critical because a lot of planners are scared to try new designs if they’re not written in any official document. This guide really gives them a kind of permission slip to innovate.

Finally, will you be cycling in Adelaide when you’re here for Velo-city 2014? And how do you feel about being forced by law to wear a helmet if you do?

Yes! We don’t have a helmet law for the general riding public in New York, though we do encourage their use and I wear one when I ride. What we’ve found is that more people biking makes our streets safer, and many bike share cities around the world that had the [helmet] laws repealed them. If your goal is safety and more bike riders makes streets safer, we found that it’s better to make biking as easy and accessible as possible.

This article originally appeared in Bike SA's Love Your Ride Magazine, available online or at Bike SA for free.