5 things you didn't know about the Tour De France 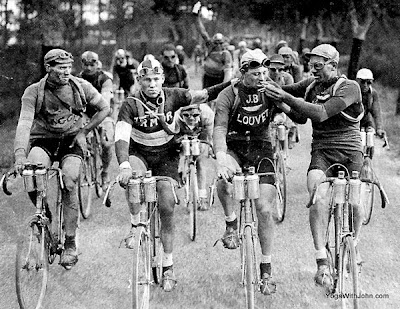 5 things you probably didn't know about the Tour De France...

A rider will burn nearly 124,000 calories over the course of the tour. In other words, it's the equivalent of necking down 421 Farmers Union Iced Coffees - which means they could neck down 20 of them a day if they wanted to.

Ah they used to smoke.. yep. Check out this vintage shot. Hardly the health conscious individuals we see today. Legend has it that instead of energy drinks, tour riders used to share bottles of wine.

3. People have tried to cheat

Sure, we've all heard about the doping scandals. But how about this story. In 1904 A fella called Hippolyte Acouturier  attached a wire to a car and held on to the other end using his teeth. Not only were his teeth busted, but so was he as he found himself disqualified.

4. There was no such thing as derailleur

The Tour de France didn't get derailleurs until the 1930s. Before then they'd have to flip the wheel for an uphill gear and a downhill gear... wow!

5. It's all in the name - The Polkadot jersey

The King of the Mountain jersey has red polka dots. Why?  Because the original sponsor of the jersey, Chocolat Poulain, used to sell candy bars with polka dot wrapping.

Be your own cycling hero with Bike SA's Grand Slam Series. 5 Recreational rides throughout the year in the Adelaide Hills and beyond.