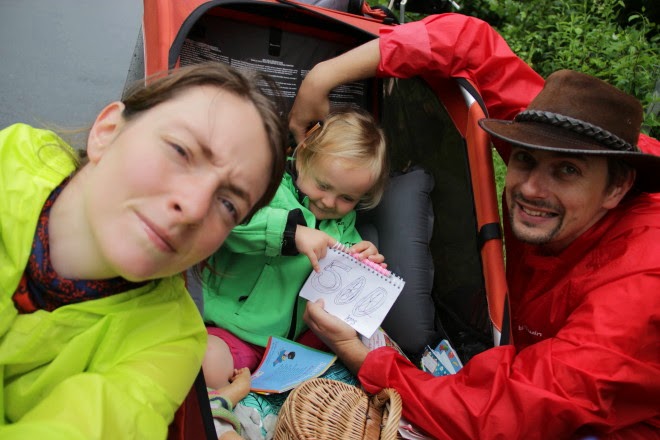 Chloe Mispelon travelled over 4,000 kilometres from Brussels to Istanbul in the summer of 2012. She believes it was the trip of a lifetime, and that others should take up the challenge.


Most people would be a little bit worried about embarking on a three month adventure with nothing but a bicycle. Well try adding a two year old to the equation. For Chloe Mispelon, it was the trip of a life-time.
“I didn’t do this trip for the cycling. But using a bicycle changed the way you travel. You meet more people, you see more things and you have much more fun.”
Starting in Brussels, Belgium, Chloe, her partner Jerome and her two year old daughter Rose  snaked their way through along the Rhine in Germany, before following the Danube River to Hungary and Bulgaria. They eventually ended up in the hustling bustling city of Istanbul. It took the family almost three months, as they cycled about 40 to 50 kilometres a day, and they carried 8 panniers and a bicycle trailer for Rose.
Rest assured, it wasn’t all easy sailing.

“In Germany, it rained for about three weeks straight, and we rather stupidly didn’t have waterproof panniers,” says Chloe.
“That’s one lesson I can pass on to anybody thinking about doing something similar. Make sure you bring waterproof bags.”
Thankfully, the family got a lot of warmer weather when they headed south. All the same, Austria and Germany were incredibly easy for the family to navigate. For first time cycle tourists she says it’s a great place to start. But if you want more adventure, head east!
“I absolutely loved Serbia,” says Chloe.
“I felt like I was a real traveler, it was something different. In Serbia and Romania there wasn’t much bicycle infrastructure, but there was such little traffic it was like having one big cycle path.”
Chloe says that early morning bicycle rides along Romania’s ‘Iron Gates’, the towering gorges along the Danube River, would never be forgotten.
So where’s her next trip? EuroVelo 8, or EuroVelo 12?
“We still haven’t decided. But next time, my daughter Rose won’t be in a bicycle trailer, she’ll be riding her own bicycle!"
This article originally appeared on the European Cyclists' Federation's website.
EuroVelo is a long distance cycle route network crossing Europe and will stretch more than 70,000 kilometres when complete. More information can be found at www.eurovelo.com