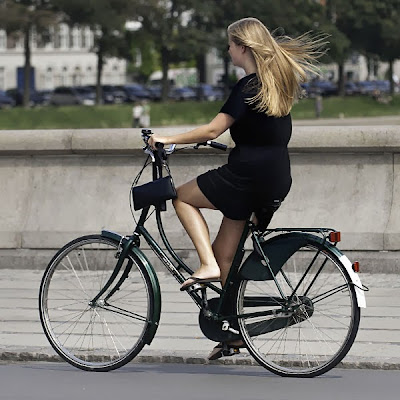 Urban mobility expert, CEO of Copenhagenize Design Co., ﬁlmmaker and photographer Mikael Colville-Andersen is heading to Adelaide to be a keynote speaker at the Velo-city Global conference in May. He’s a vocal advocate for bicycle culture (partly through his blog Copenhagen Cycle Chic, see image, right), cycle-friendly cities and getting more people on bikes. So why is he refusing to ride his bicycle in Adelaide? His answers are both provocative and revealing.

Bike SA: You’re an ambassador for cycling, but uniquely so. Cycle chic was your idea and you’re one of the few to tie the bicycle to a better way of urban living. Could you set out why you chose cycle chic to promote cycling?

Mikael Colville-Andersen: Once I realised what was going on when people looked at my blog [copenhagencyclechic.com] – why all these people were reacting to simple photographs of Copenhageners cycling in their regular clothes on regular bikes – I realised that urban cycling had suffered from bad branding for a generation in many parts of the world. It was regarded as sports or recreation and not much else. Despite the fact that urban cycling was a normal transport form in every city in the world for decades up until the 1950s. The effect of Cycle Chic on changing the perception of cycling has been massive. It was the right idea at the right time. We’ve brought the bicycle back to the public consciousness of the 99 percent. Using mainstream marketing techniques to sell urban cycling was normal for decades, as well. Selling urban cycling like we sell any other product on the market is the way forward. The cycling sub-cultures, like all sub-cultures, are incapable of doing so. They love their fancy gear, their uniforms, their sanctimonious soapbox. This doesn’t sell anything to the mainstream audience. Regular citizens just want a convenient and enjoyable A to B journey to work, to the shops, to the restaurant. Providing them with imagery from cities where urban cycling is normal has been the key to changing perception.

Does this approach have the drawback that Cycle Chic is seen to be a bit exclusive? We can’t all afford tweed Rapha trousers or a Pashley bike. Is it egalitarian?

Cycle Chic is for the 99 percent. Rapha is for bike geeks, it’s not ‘Cycle Chic’. Pashley bikes are nice, but they're not the bicycle. Cycle Chic is not about the bicycle – it’s about YOU, on the bicycle. It’s about style over speed. For example, vintage bikes are booming all over the planet. The people returning to the bicycle are keen for an old-school feel. Restored bikes from the 1950s or 1960s are incredibly popular. All you need is a bicycle. Gone is the false impression that you need speciality clothes for riding a bicycle in your city. Open your closet, it’s already ﬁlled with cycling clothes. They just happen to be the same clothes you walk in, take the bus in. Cycle Chic is a democratic rejection of the elitist approach of the “avid cyclists” who will preach for days about the “right” clothes and the “right” gear.
I also started the Slow Bicycle Movement ﬁve years ago. Based on Slow Food, Slow Travel, etc. It’s been an amazing indicator of what regular citizens want. It’s a rejection of the lycra mentality and an embrace of cycling slow and enjoying the ride. There are over 8000 members of our facebook group. [facebook.com/groups/ slowbicyclemovement]

You’re heading to Adelaide Velo-city Global 2014 as a keynote speaker. What are you expecting to ﬁnd here?

I’m expecting to ﬁnd a car-centric city still handcuffed to the archaic trafﬁ c culture inherited from the last century, although one with a wish to modernise itself and plan for the new millennium. The fact that the city – and state – applied for and won the right to host the Velo-city conference is a positive sign. I believe the politicians are aware that there is a new paradigm in city planning, one that works to drastically reduce car use and reclaim a lot of space that has been so arrogantly allocated to the most destructive and inefﬁcient form of transport we know


– the private automobile. Now, we’re seeing cities around the world focusing on becoming more liveable. Liveable cities are those with fewer cars, trafﬁc calming and separated bicycle infrastructure. It’s the new normal. Adelaide – and all Australian cities – are light-years behind other cities in the world. But the Velo-city conference will, hopefully, be a great catalyst for change and modernisation.

What do you hope to see emerge from the Velo-city conference – for cycling in Adelaide and in a global context?

The Velo-city conference series is a fantastic forum for all those working towards more liveable cities. It’s an idea exchange. I hope that Adelaide and the rest of Australia will be inspired to change. If realising how depressingly far behind you are is part of the process, so be it. That will lead to a desire – among politicians and citizens alike – to modernise and embrace the bicycle as transport once again.

I think you’ll also realise that the world has been pointing and laughing at your bicycle helmet laws for almost two decades. Whenever a helmet law is proposed elsewhere in the world – which isn’t often – Australia is held up as the example of how helmet laws destroy urban cycling. Hopefully, it will inspire Australian cities and states to realise that in order to encourage people to cycle, infrastructure and trafﬁc calming is the way forward and repealing helmet laws is a part of it. Interestingly, the Northern Territory has the highest cycling rates in Australia. They partially repealed their helmet law and the result was remarkable.

And why don't you people all wear motoring helmets when your government found out that it would be beneﬁcial in reducing societal harm? [see motoringhelmet.com]

Adelaide is changing: more bike lanes, calmer streets, the beginnings of a push to turn our empty-after-6pm CBD into a lively residential shared pedestrian/bike community. We have a growing attachment to the bike. Have you seen this phenomenon of an emerging attachment to the bike in other cities? What can we learn from those cities and where is Adelaide on the scale?

The bicycle is back. As transport. As a solution for many of the ailments cities suffer. Bicycles are being taken seriously once again, all over the world. It’s Bicycle Culture 2.0.
Six years ago, few cities even discussed bicycle infrastructure. Now, the race is on to become bicycle-friendly. Look at our Copenhagenize Index 2013 – the world’s only bicycle-friendly cities index, at copenhagenize.eu/index.

On the list are the usual suspects like Copenhagen, Amsterdam, Berlin, Tokyo. Cities in the four great bicycle nations. But look at the other cities on the list. There were no bicycles left in Paris, Barcelona, Seville, Dublin, Bordeaux only ﬁve or six years ago. Now, they’re embracing the new, modern paradigm. Seville went from under 0.5 percent modal share for bicycles to 7 percent . Dublin was also under 0.5 percent . Now they are 4 percent city-wide and can get close to 10 percent in the city centre. The same for Bordeaux. Who would have thought that the bicycle would have had such a massive transformational effect on Paris. Three percent of trips are by bicycle. The common denominators are well-designed bike share systems, separated bicycle infrastructure and trafﬁc calming measures. Eighty percent of Barcelona is now a 30 km/h zone, for example. We only publish the Top 20. I can reveal, however, that Australian cities were rather far down the index. Change is possible, however.

Is this attachment to the bike – young men on ﬁxies and a massive growth in the weekend road warrior – a positive growth indicator for a city that is seeking to be more sustainable? Or a fad?

If you wish to re-establish the bicycle on the urban landscape as a respected, accepted and feasible form of transport, you build separated, on-street infrastructure. (Not those goofy painted lanes that force bicycle users to cycle between the door zone and moving trafﬁc). We are seeing that cycling fads have popped up as well. History is repeating itself. When the bicycle appeared on the urban landscape over a century ago, the transformational effect on society was massive. All manner of trends and gadgets and gimmicks appeared, in order to capitalise on the trend in a market economy. It is a positive growth indicator when Citizen Cyclists return to the bicycle. The growth of Mamils (Middle-aged Men in Lycra), it is worth noting, has nothing to do with urban cycling. These sub-cultures do little for changing perceptions about cycling in cities. In fact, they stunt the growth of it.
The risk is that we over-complicate the simple act of riding a bicycle in a city. The avid cyclists boast that they can “train” cyclists and advise them on all manner of unnecessary gear so that “we” can ride like “them”. All Citizen Cyclists need is infrastructure and trafﬁc calming. An increase in female cyclists on normal bikes is a great indicator that you’re on the right track, but it’s not until you see great numbers of parents with children on the back of their bikes or the elderly riding bicycles that you know you’re on the right track.

Does this lead to potential commercial opportunities for businesses? And does this commercialization assist the difﬁcult metamorphosis of a city from a Car-is-King to a sustainable urban environment?

It’s interesting how many people are now involved in greenwashing – or rather bikewashing. Especially the car industry. The more we see bicycles in our messaging, the better. As long as we avoid overcomplication. In Copenhagen, 56 percent of our cycling citizens say the main reason they ride bicycles is because it’s quick and convenient. Nineteen percent say it’s good exercise. Not ﬁtness – they just get their 30 minutes a day riding around with their iPod and shopping in the basket. Only 6 percent ride because it’s cheap and only 1 percent ride because it’s good for the environment. It’s all about what I call “A2Bism”. If you want people to ride bicycles in a city, you make the bicycle the fastest way from A to B. Safe infrastructure, trafﬁc calming, bike racks. Period. All the commercialisation is irrelevant if you do that.

With that said, the products we’ve selected for our global webshop – cyclechicrepublic.com – are based on the kind of things we take for granted in Denmark and the Netherlands. Style and practicality.

What is the gist of the message you’ll be delivering in Adelaide?

I speak about how we must reject a century of destructive trafﬁ c engineering and use basic design principles to plan our city streets instead. Trafﬁc engineering has failed us. It still kills people. It ruins cities with it's car-centric focus. Designing cities for people and using human observation is the way to modernise our urban centres. I call for a return to rationality and common sense and planning our cities like we did for 7000 years before the automobile showed up.

[For an idea of what Mikael will be discussing, see this TED Talk tedxtalks.ted.com/video/ Bicycle-Culture-by-Design-Mikae]
Will you be bringing your bike and going for a ride while you’re here?
I don’t ride bicycles in cities that have helmet laws. Fortunately there aren’t very many of them in the world, but I'll be enjoying Adelaide on foot. From a professional perspective, I don't need to ride a bicycle in order to observe the infrastructure, behaviour and Desire Lines [paths created by riders simply by going where they want to go] in a city.
Will you be seeking out Adelaide’s chicest on two wheels to photograph for your blog?
I always have my camera with me, so the odds are good. 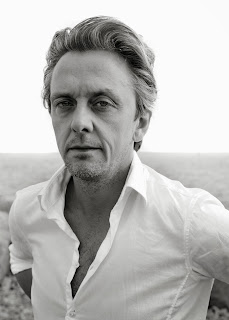