Team Austin - the next chapter 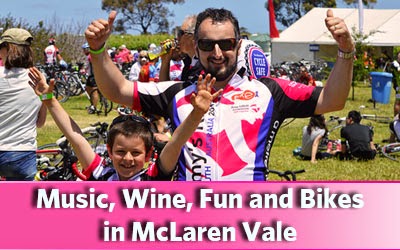 Austin Arrowsmith shares the next chapter of his story...
Family participation in events is a great thing. Sharing the excitement with loved ones is an awesome experience, from riding to school with Dad, to riding over the finish line.

It was in everyone’s eyes, as we filled out the forms to participate in Amy’s Ride, too. With no tandem tag-along as yet, the excitement turned to concern over who would miss out if we didn’t get one in time. I had to draw short of promising to ride it twice - once for each child.

With time drawing near, despite many offers of help to find a tandem tag-along, they were just “too hard” to get in Oz. “There’s no market” I was told. So I bit the bullet and bought a tandem bike. Perhaps a tandem with a tag-along was a doable option? They aren’t much easier to find on short notice either! At least, not without breaking the bank. One place near Sydney has them in stock and was willing to ship nation wide - “we do it all the time”. Three days later, it was on our doorstep and half a day off work later, it was ready to roll down the street. With gearing that would take this up the worst hill (MTB gears were a change after being used to road bike gearing), I was initially concerned about getting over 25kph, but then realised with two kids in tow, those gears could be a life saver! Then the kids came home and there were squeals of delight and eagerness to try it out. Now that the warmer weather is here, there would be new fights, but with the rear seat post needing to be higher to accommodate the tag-along attachment, the longer legs would have to win out.

As with all new things on two wheels, it needed some practice and adjustments, and some friendly advice from a local bike shop.

Those of you around the North-Eastern or Western suburbs may have seen us on a few of our training rides - riding down to the beach and along the foreshore gets lots of smiles and comments, and we always smile and wave back. Getting some hills training in is littered with “Awww maaaan”s but the squeals of joy as we crest to come down the other side are just as plentiful. Plenty of parents have asked about the bike and how they could get their kids on one, and asked if it was custom made!

The training rides for endurance and some hills have made the daunting task of taking both of them on Amy’s Ride less stressful, as we know we can ride 65ks together now - with sufficient breaks to stretch our legs and drink and eat up. Knowing how well the ride is organised with the rest stops means I know we’ll make it just fine.

We are now already trying to plan how to take #3 with us next year, as he’s looking on with eager eyes from the sidelines.

Keep an eye out for us on the road and say hi! If you’ve already signed up for Amy’s Ride, then wave and say hi as you zoom on by!

Email ThisBlogThis!Share to TwitterShare to FacebookShare to Pinterest
Labels: ARSA2014