I now pronounce you husband and bike 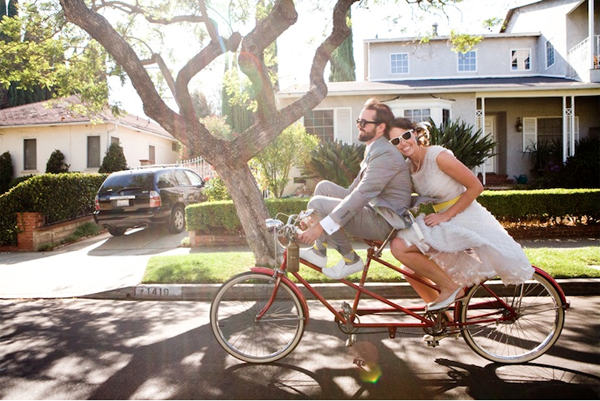 With Valentine’s day just around the corner, Bicycle SA uncovers some rather interesting bicycle weddings.

A Bicycle Wedding in San Francisco

Newly weds  Derek and Rebecca from San Francisco surprised their guests with a rather gorgeous bicycle wedding.

“I can honestly say it was the funnest wedding I’ve ever been to,” says event planner Jordan Ferney, who wrote in detail about the wedding on her blog “Oh Happy Day”.

Not only did the bride and groom end up on two wheels, but invitees all took part in an post wedding vow bike ride.

“After the ceremony everybody walked around the corner and saw that there were rows and rows of rented bicycles. It was so exciting!”

Without a doubt a memorable wedding for everyone.

No… it’s not a cult. It’s a mass bicycle marriage.

In 2011, As part of Europe’s annual Mobility Week, the local bike advocacy group in Vienna offered cyclists the chance to what many have aspired to do... get married to their bicycle.

According to the European Cyclists' Federation, it was the world's first mass bicycle marriage ceremony. Perhaps it's time for Adelaide to do something similar?

Remember when much of the world was gripped by Royal wedding fever. A little known story was Lord Mayor Boris Johnson's gift to the newlyweds... a tandem bicycle modelled on London's popular Barclay Bikes.

Perhaps it's time to offer the royal couple a baby seat?

Do you know of any good stories about bicycle wedding in South Australia? Let us know in the comments below.
Posted by Bicycle SA at 15:19